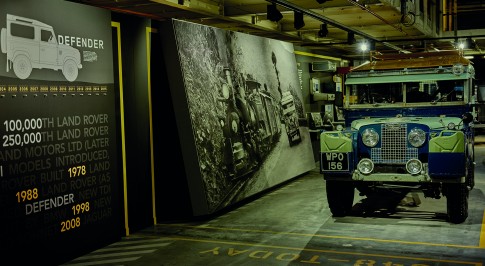 Land Rover has recreated the production line of 1948, marking the start of a year of celebrations as the Defender enters it's final year of production.

More than 20,000 visitors are expected to attend the 'Defender Celebration Line', which is housed inside one of the original production buildings at Jaguar Land Rover's Solihull factory and is located at the heart of the Defender production line.

The 'Defender Celebration Line' takes visitors back to the beginning of the world's most famous 4x4 manufacturer and reflecs how the first Series I Land Rover was built at the Solihull manufacturing plant just after the Second World War. The production line forms part of a new Defender tour, showcasing replica models in various stages of production, each one built using identical parts and in precisely the same way as the original Series I.

The display gives an insight into life on a car production line in the late 1940's using original tools and a draftsmen's drawing board where visitors are also asked to wear authentic overalls known as 'cow gowns.' The attraction boasts an area dedicated to telling the story of the creation of the original Series I by Land Rover founder Maurice Wilks using previously unseen video footage provided by his family.

Jaguar Land Rover heritage director John Edwards said: "Land Rover has a rich heritage based around the Series I and Defender models, and we wanted to create something extra special that would give visitors and enthusiasts a unique insight into how it all started back in 1948. It has been a huge task to recreate a production line from almost 70 years ago, from sourcing original parts for the Series I models, to authentically re-creating the working environment and uniform of employees who were here. The team involved has been meticulous in their research, planning and creation of what is a fitting tribute to the legendary heritage of Land Rover."