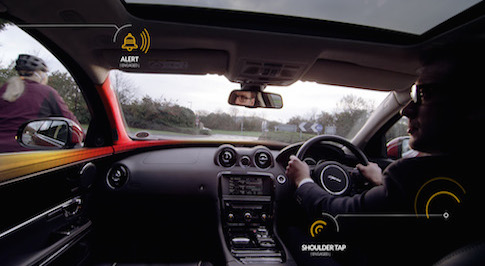 Jaguar Land Rover has revealed a brand new road safety system, which will use colours, sound effects and touch to alert drivers to potential hazards.

The concept technology, named 'Bike Sense', is currently being developed at the British carmaker's Advanced Research Centre and could have the ability to identify hazards that the driver cannot see.

Bike Sense is specifically designed to prevent collisions between cars and bikes. Using multiple sensors, the car will detect when another road user is approaching, identify it as a bicycle or motorbike, and warn the driver.

Rather than using a generic warning icon or sound, Bike Sense uses lights and sounds that the driver should instinctively associate with the potential danger. The audio system will simulate a bicycle bell or motorbike horn from the respective speaker, so the driver immediately knows the direction the cyclist is coming from.

Similarly, if the two-wheeler is coming up behind the car, Bike Sense will detect if it is overtaking or passing on the inside of the vehicle. The top of the car seat will then extend to 'tap' the driver on the appropriate shoulder. The idea is that the driver will then instinctively look over that shoulder to identify the potential hazard.

As the cyclist gets closer to the car, a matrix of LED lights on the windowsills, dashboard and windscreen pillars will glow amber and then red depending upon the distance. The movement of these lights will also highlight the direction the bike is travelling.

Director of research and technology at Jaguar Land Rover, Dr Wolfgang Epple, said: "Human beings have developed an instinctive awareness of danger over thousands of years. Certain colours like red and yellow will trigger an immediate response, while everyone recognises the sound of a bicycle bell."